Jack's Halloween costume this year really happened by chance. Last year, his 1st Halloween, I was immediately intent on him being a monkey.
This year, we were at a loss for what to dress him as.

Initially, we saw cute Elmo and Cat and the Hat costumes, but they were upwards of $49 and I just couldn't rationalize spending that much on something he'd only wear one day. (I'm getting cheap in my old age) Plus, I realize that someday soon, he'll be old enough to request what he wants to be, so I'd prefer to save my pennies for those days.

Then I thought maybe I'd dress him up as DJ Lance because the costume was hilarious, but my boy is way too fair skinned to pull off a bright orange costume. And as someone that used to work in the fashion world, stupid things like that mean more to me than the average person. I couldn't let my boy go out in something that washed him out.

So one day, strolling the asiles of my favorite store, Target, I found this little number...

This year, per usual, we went to my mother and father in laws to pay Papa a visit before he went to work. Jackson LOVES his Papa, so much so that I'm pretty sure Papa takes the cake over even mommy and daddy somedays.  I could be jealous of this, but seeing the two of them together makes my heart melt.

Things I learned Trick or Treating this year:

*Toddlers that don't nap walk slower than usual.
*They also refuse to say "Trick or Treat" no matter how many times you prompt them to.
*A sleepy toddler and a 37 week old pregnant woman have pretty much the same stamina.
*My son's candy of choice: Kit Kat's. He actually dug through a bowl at one house just to find one.
*It only takes 3 Kit Kats to make a toddler bounce off the walls.


How did you spend your Halloween?? 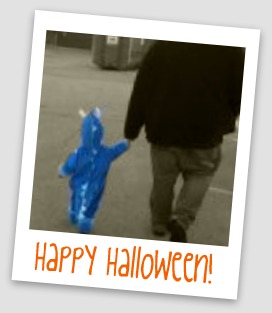