Golf and other adventures #iPPP

Thank you to all that participated in my Free FALLin meme last week.
I took a wee bit of a vacation from blogging to soak up some family time. It was a much needed break and good to spend time together. Most days, my husband and I have schedules that are opposite and we only see each other in passing, so it was nice to see each other- awake- for more than 10 minutes at a time.

Mostly we spent time at home, relaxing. For me, a true vacation means doing nothing at all. There were a lot of impromptu family naps and snacking in our PJ's.

Sunday, we ventured with some family out for an early birthday celebration for my husband. We traveled up north to a place called Top Golf, which is a driving range that incorporates a game into hitting your golf balls. The best way I can think to describe it is a cross between golf and skee ball. You hit your ball into various targets and each target has a specific point value. Whoever has the highest score after 20 balls wins. There are these uber-cool bays that you play from and each one has a computer that tells you where you hit your ball and how many points you get. 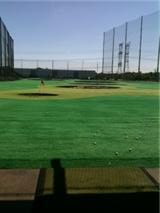 I've never been golfing before. At least not golf golfing. So I was a little worried about how I'd do, but I actually did OK. My first game I actually beat my sister in law AND my husband and 2 of my brother in law's. And yes, I am bragging. I even took a picture of the score just because I figured no one would believe me:


Sadly, I must admit that my winning is mostly due to the fact that I have great beginners luck when it comes to games and things like this. I assure you my game went down as the day progressed.
Some things I learned about golfing:

1) I am most definitely sure that my game would have been better if it were not for my boobs and belly constantly getting in the way.
2)Though I'm sure if I wasn't pregnant I'd probably be blaming my games decline on the alcohol I would be drinking.
3) I'm upping my game next time and wearing a glove. I had a wicked callous on my hand from the club, though it was probably because I wasn't holding it the right way....

Monday was a beautiful day and we planned on taking Jack to the zoo, but he woke up with a fever. I should mention here that my child hardly ever gets sick, but when he does it always happen to be on beautiful days that we have planned something.  Though I felt kind of guilty wasting such a beautiful day, we stayed in and had a relaxing, low key, cuddly kind of day.Though I hate to see Jack in any kind of distress, I must admit that I loved all the cuddles. Now that he is a toddler on the move, I hardly get them anymore. 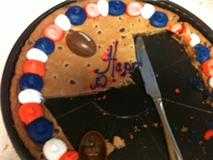 Tuesday was my husband's actual birthday.

This is how we do Birthday cards in our house. The rule?? It must be edible. The yummier the better.

Jack woke up with a slight fever that was completely gone by noon. He seemed to be feeling much better until he slid off our bed a little too fast and slammed his chin on the foot board. It was a pretty good gash and we considered taking him to the doctor, but after a few minutes it stopped bleeding and he was all calmed down.

Then we made the mistake of trying to put a band aid on it. This evoked more tears and screaming than the actual wound itself.

5 band aids and many tears later, he won. 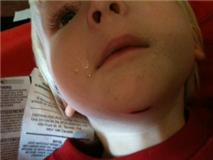 This post is a part of #iPPP with Taming Insanity and A Belle, A Bean, and a Chicago Dog.