Macho Man Randy Savage died this weekend.
It made me a little sad because I grew up on the WWE or as I knew it back then...the WWF.

My Uncle Roy, whom I love and adore was a HUGE fan and I spent many a day watching it with him.
Back then I was too young to scoff at the fakeness of it all.
Instead, I marveled at the likes of Hulk Hogan, Macho Man Randy Savage and my personal favorite 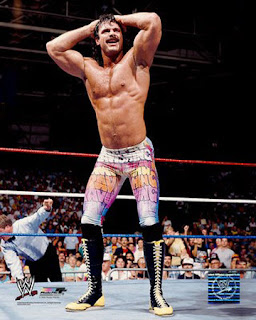 I was probably a little too young to be watching him and his seductive pelvic thrusts but my parents bought me Dirty Dancing when it came out. I was 7,  so clearly they didn't really patrol what I watched.

Fast forward a few years to eighth grade.
I was boy crazy early on.
Maybe it had something to do with the fact that my parents let me watch Dirty Dancing and greasy men wrestle...one can't be sure.
But I liked boys.
And I learned early on, that the best way to talk to them was to get on their level.

So I became a tomboy.
I played sports.
I watched sports.
It was 1993, so the Chicago Bulls were what everyone was talking about. WWF was so 1990.
Until I had my eye on a boy and found out he was a wrestling fan.

So one day, at my friend Megan's house I mustered up the courage to call him.

Him: Hello
Me: Hi! This is Angie. From School.
Him: Hey.
Me: So I was just wondering if you knew who won Wrestlemania this year??

I hung up the phone and laughed, but was secretly cringing inside.
I played it off as a crank call.
But I was never able to live it down.
The next day I was mocked by the boys in my class.
And 12 years later when I ran into that same boy at a bar in the city the first thing he asked me was
"So do you know who won Wrestlemania this year??"

But at least he remembered me...