Sometimes I am thankful that I no longer have a long commute that forces me out into the cold, snow and ice. But then there are days like Monday.

It was laundry day and as I folded it up I came to a sad realization...I haven't been out in weeks.

So we decided to get out.

I showered. I actually dried my hair instead of throwing it in a messy bun. I put on makeup and jeans. JEANS! And since it happened to be a day that we all were home, we decided to run a few errands and then go out for dinner to our favorite pizza place. At least that was the plan.
Because it is totally realistic to plan with a toddler right??

1st on our list of plans, get Jacks hair cut. Since its his first haircut we decided to go all out and take him to one of those fancy places that specializes in kids hair cuts. They have cute little cars and bee's for the kids to sit in and they let them watch a movie while they cut their hair. In theory we should have had a great time, except they could only fit us in at naptime. And of course they were running about 20 mins behind schedule which is great for a 14 month old that is over tired and wants to get into everything. So by the time they are ready for Jack he's a mess of emotions, which I'm guessing is the reason why the back of hair is all sorts of crooked. After all is said and done I cough up $20 for a haircut I could have done myself. But at least I got this picture to remind me of the lovely event.... 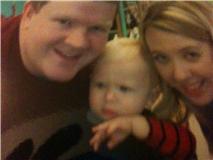 Next on our list, Kev's dentist appointment. Except that we arrived super early so we all of a sudden had an hour to kill. We were in downtown Naperville which would have provided us with tons to do had it not been a sleety icy tundra. We decided to hunker down in Barnes and Nobel for a bit and grab some coffee while we let the boy run around. But alas it was MLK day and the place was swarming with little hellions. And there was this jack-ass yuppie couple that decided to take up the whole kids stage area with their stuff while their teenage girls sat nearby-in the KIDS area drinking coffee on the kiddy picnic table. Did I mention that there were a ton of open tables and chairs everywhere else?? We let Jack run around for a little while and then packed it up quickly because my husband realized I was about to go all bananas on the wife of said yuppie couple. She kept giving me these judgy looks and then kept whispering to her douche rod of a husband who was working on his laptop in the middle of the kids area. Sorry if we were distracting you, but this area is for kids, so I'll let my toddler run where ever he wants you precocious beeoch.

Finally we went to Kev's (thankfully) quick dentist appointment and since the day was pretty much a complete mess, we decided on ordering our pizza and bringing it home.  And because we were still all off on our planning we arrived to pick it up 20 mins early. Because waiting in the car with a hungry, tired toddler is indeed my idea of a good time.

I guess I'll just ride out this winter thing and make my next appearance in the spring...

Posted by Unknown at 9:08 AM
Email ThisBlogThis!Share to TwitterShare to FacebookShare to Pinterest
Labels: annoying things, bad days, cabin fever

Dude...did you at least get Malnati's?

Yep, which kinda made the whole mess of the day worth it!