Its the most wonderful time of the year

As always I am participating in Fill in the Blanks Friday over at The Little Things we Do.
But first a story on how I got a free car seat.

I try my best to always be a pleasant shopper. Having worked retail most of my life, I believe in always being as kind as I can to retail workers. I try not to complain unless warranted, but everyone reaches their breaking point. For me that came last week...

I had ordered a convertible car seat online early November. I had used a gift certificate we got for Jack's birthday and had a sweet coupon for it, so I paid very little for it. When the package arrived, it was really small and upon further review I came to realize that they had sent me the wrong thing. What I received was an extra car seat base for an infant car seat. It was clearly a mistake on their part as the packing slip enclosed with it had the item description of the car seat I actually ordered, so I called their customer service number. At the time apparently their computer system was down, which is easy enough to explain, except the customer service rep was incapable of this because this is what our conversation sounded like:

Rep: "How may I assist you today?"
Me: "I placed an online order and it seems I was shipped the wrong item"
LONG PAUSE
LONG PAUSE followed by papers rustling and what I believe to be a cackle or fart
Rep: "I'm sorry I can't help you right now"
Me: "Um, what do you mean?"
Rep: "They are working on our computers right now, I can't do anything"
Me: "Ok, I'll call back later, do you have an idea of how long?"
LONG PAUSE AGAIN-at this point I am pretty sure the rep is unaware I even asked him a question
Rep: "ok"
Me: "ok what?"
Rep: "you'll need to call back later, our computers are down"
Me: as I bang my head on the wall "Fine" and I hang up

Eventually, I called back and talked to a somewhat more educated person. They apologized and said that somehow the car seat I ordered wasn't available. He found a similar one that was a little more expensive but offered to adjust the price to what I originally paid and even threw in next day shipping for free.
I was satisfied.
Until I received my order.
Clearly the new seat was NOTHING like the one I originally ordered, because this one was a BOOSTER seat. No straps, no back, nothing. I wondered how the Customer service rep could look at this item and think it was anything like the one I had originally ordered. Livid, I called the customer service line again, hoping that intelligent life was on the other line. Sadly it was not. Long story short I was now stuck with 2 things I didn't need and now I had to lug them to the store to return them.
After dragging one small and one ginormous box to the back of the store where the customer service desk was, I explained my situation. Even though I was angry, I was nice to the lady helping me out because none of this was her fault. She was very helpful and took everything back but was having a problem crediting back the full amount. She finally called over the store manager who seemed to be in a funky mood from the get-go. He didn't want to refund my original shipping charges and I, as kindly as I could, told him that that was not an option seeing as I was the one that was so inconvenienced. Begrudgingly-and never apologizing or even really acknowledging that there was even a problem- he went to the back and handed me a $10 bill. Hush money. And still not my full amount. At this point I was beyond annoyed but I didn't feel like making a big scene. I looked him in the eye and said "This still isn't what I paid, but I get it, you want me to go. I'll be sure to call customer service and let them know how helpful you were SCOTT" Unimpressed with my threats he walked away.
I had intended to call or write an email to customer service outlining my situation, but I put it off. Then yesterday we got home from a day of shopping and found a huge box on our doorstep. The ORIGINAL CARSEAT!! Maybe the warehouse realized their mistake and sent it out, but nonetheless, I had already been credited back the amount. So I guess in the end the payoff for all my troubles was worth it!

And now for Fill in the blanks Friday... 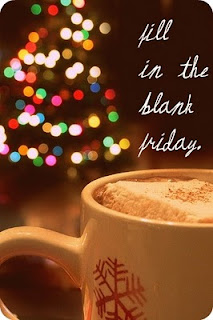 1. Holiday spirit should be more contagious. Despite this being a wonderful time of year, there can really be some unpleasant and grouchy people out there...especially in malls.
2. The holidays are a time to reflect on the past year and share good times with friends and family.
3. My favorite things to do around the holidays are hosting and going to Holiday parties. I loving having a Christmas Party each year. This year we are doing a Top Chef style appetizer potluck and having a Bunco tournament.


4. A holiday tradition my family and I have is staying up late on Christmas Eve-the adults anyways- and playing board games. Now that we have Jack I am looking forward to creating new traditions! Does arguing over garland and tinsel count too? Because Kev and I seriously do it every year. We have garland, but he insists on calling it tinsel. It's a petty argument, I know, but there is a big difference in the two.
5. Holiday music is awesome, but only in moderation.
6. This year, I'll be spending the holidays at my in-laws on Christmas Eve. Christmas day we are staying home and told our families that whoever wants to come over is more than welcome!
7. Holiday wish list A Kurieg platinum coffee maker, a Cricut machine, anything from Ann Taylor Loft, this or any print from Mae Cheverette's Etsy Shop, as new case for my iPhone, Target gift cards, and for some reason the 16 year old boy in me really wants the Kinect for Xbox and the Dance game for it.
Posted by Unknown at 12:32 PM
Email ThisBlogThis!Share to TwitterShare to FacebookShare to Pinterest
Labels: fill in the blank friday, the holidays, wishlists

Thanks for stopping by. I'm now following you back.