The one where I slept through childbirth...

So that Thursday night when I was sent home, baby less, I was frustrated. But I didn't have much time to wallow in self pity because when we got home I started having contractions. Real ones. Painful one that had me doubled over. But as I watched the clock I noticed that they were sporadic. Sometimes every 10 minutes, sometimes 7 minutes apart. Never close enough to warrant an actual trip to the hospital.
So for 2 and 1/2 days I suffered-drugless-thru intense contractions.
Finally Sunday November 8th had arrived. That day the Bears played and Kevin invited his whole family over to watch the game. All while I sat, contracting, on the couch. Finally at 6pm we drove to the hospital, settled into our room and the show finally began.
After changing into my wonderful hospital attire and filling out the appropriate documents, the nurse came in to insert my IV and do a check. Her 1st question for me...
"Um did your water break?"
What I wanted to say was-"shouldn't you already know that? Isn't it in my chart?" but instead I opted to be polite because after all, this women could delay my epidural if she thought I was a beioch. So I explained everything that happened the first time I came in. She shook her head and them calmly told me that she was pretty sure my water had broken but sent for an ultrasound just to be sure. At this time they also began my IV which, of everything I went thru, was the only time I felt sick. This was probably due to the fact that they tried several times on one arm, burst a vein, and tried a few more attempts on my other arm before it was finally in. I felt faint so the nurse asked Kevin to go to the bathroom and get me a cold compress. He came back with a wet pair of the mesh undies they give you. Poor Guy. The nurses were all laughing at him. I was just grateful that he got my mind off the fact that I was being poked and prodded by the huddled masses.
After I was all hooked up and situated. The ultrasound tech came in. I still had plenty of fluid, but since the nurse said I was leaking amniotic fluid, she administered antibiotics thru my IV just in case. The they inserted the Cervidil and gave me an Ambien.
The idea... I go to sleep and let the Cervidil open my cervix. In the morning they would start the pitocin.

At least that was the idea.

I slept for maybe 2 hours before I was awoken with more contractions and almost immediately after I woke up a nurse came in. She saw my contractions intensify over her monitor and wanted to make sure I was OK. I said I was, and off she went.
Execpt I wasn't ok.
The contractions were coming one on top of the other. It seemed like I had no time to rest before another one came. And they were stronger. I threw a pillow at Kevin to wake him up. His response "call the nurse". So I finally did. She came in and checked me. I was almost 5 centimeters. She asked me if I wanted my epidural and if I wasn't so busy breathing through my contractions I probably would have kissed her. The anesthesiologist came in pretty quickly after that. He had trouble getting my epidural in but it didn't bother me at all. Once it took, I felt sweet relief. My body relaxed and I drifted off for a few more hours of precious sleep.
In the morning, they started the pitocin at 7am. We had some friends and family come in my room to chat for a bit. Around 9am I started to feel horrible pressure and as I told the nurse "I think my epidural is wearing off, because I can feel stuff". She kicked everyone out, checked me, and sure enough I was 9 centimeters dilated.
It was go time.
The rest of it was kind of a blur.
When it all was said and done I pushed for 4 hours. Saying it seems like such a long time, but in all actuality it didn't feel like 4 hours. We watched Thelma and Louise for most of the time, which I thought was kind of funny. I was laying there talking to my L&D nurse, watching the movie and every few minutes or so, when I felt a contraction coming, I would alert them, push, and then we'd go back to watching. Finally the time came and Jack was right there-or so they said.
***Side note: In the end, when the baby is right there and you are pushing, i don't care how great your epidural is...you feel EVERYTHING. But at that point I didn't even care. I was on a mission to deliver a baby, so for me I think adrenaline just took over. ***

Kevin and he nurse kept saying he was right there. They could see his head.
But as hard as I pushed he wasn't coming out.

When the doctor came in he wanted to do a c-section right away. The nurse convinced him to let me push a few more times. He tried forceps-not a pleasant feeling btw- and then the vacuum. Neither worked. So after pretty much shoving Jack back up into my uterus, we went to the OR.
Some women get really freaked out or sad that they have to have a c-section. I was relieved. At that point I was so exhausted and ready to finally meet my son, that I didn't care.
It's a little scary when they finally decided to do a c-section. Everything moved at warp speed. Before I knew it I was being prepped for surgery. Kevin was in another room, getting his scrubs on. The last thing I remember was them putting up the curtain and letting Kevin in.
That's right folks...I slept thru the entire delivery.
Snored actually.
The anesthesiologist said she didn't give me anything extra, but what ever she did give me, knocked me out.
When I came too, I was still in the OR getting put back together. I had to ask my nurse if I had my baby. I was so loopy and out of it. They wheeled me to a recovery room, where I shivered for the next 20 minutes and waited for someone to fill me in on what just happened.
Kevin finally came in and told me that we had a beautiful 7lb. 15 iz baby boy.(not the 9.5 lbs they kept telling me!) He was in the NICU due to a laceration on his head, but he was fine. Turned out his shoulders were stuck in the birth canal and that is why he wouldn't come out the other way. On the way up to the maternity ward they wheeled me in to see him and I cried when I laid eyes on him. My heart turned to mush.
After all was said and done, I had quite the birth experience. I was a hot bloated mess. I had burst blood vessels in both eyes, my whole face and even on my shoulders and chest. I ended up with a 2nd degree tear AND a c-section, but in all honesty I didn't think the recovery was all that bad.
There are days that I feel cheated over those first few minutes of Jacks life. I feel sad that I didn't get to hear his 1st cry or hold him right away. I try not to let it get to me though, because I know that everything happened for a reason. And in the end, we both came out on the other side alive and healthy. And that's all that matters.
So that my friends is the story of how we got from here.... 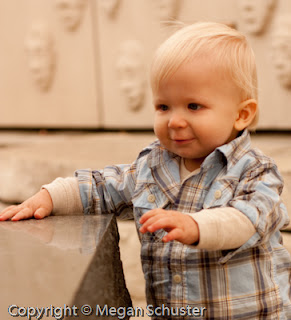 Posted by Unknown at 7:32 AM
Email ThisBlogThis!Share to TwitterShare to FacebookShare to Pinterest
Labels: aches and pains, being a mom, catching up, Family, First's, lifes big moments, My so called life