3 posts in one day...can you believe it? In all fairness WMW's post was pre written and the giveaway one took 3 seconds, so this is the REAL post for today!

So yesterday Kev and I both had the day off. I committed to a whole day without the computer so we could really soak up as much time together and with Jack as possible. I envisioned us relaxing, taking a walk outside-maybe to the park. And then, after his afternoon nap, we would put Jack in his highchair and he would watch as we carved our first pumpkin together as a family.
Sounds nice enough, right?
See it would have been a lovely day, except none of that actually happened.
What really went down was this:

We realized that we were is desperate need of groceries so we headed off to the store for a few things. When we got home we gave Jack his 3 o'clock bottle and put him down for his afternoon nap. Then we decided it should be family nap time so we both went up to bed too. Little did we know that this would be Jacks shortest. nap. ever. So by the time I finally fell asleep it was time to get up. (isn't that the worst?)
Then we went downstairs to carve the pumpkin. Except Kev decided at that moment he was going to fix the pipe under the sink that's been broken for a week and a half- in his defense I get it.... Only one person can really carve a pumpkin at a time. It's not like it's exactly a two man job. And I have been hounding him to fix that pipe. But then Jack was less than enthralled by my pumpkin carving skills and wanted no part of it so I was frustrated because so far none of this was going to plan.

**Side note: Carving a pumpkin is not as much fun as I remember it to be. Maybe because my dad did most of the grunt work then. Cleaning out the guts and seeds is a huge pain in the behind. Especially when the sink to wash your hands in isn't working at the time. **

So I took a break from pumpkin carving and brought Jack downstairs to play while Kev finished fixing the sink. Soon it was dinner time for Jack so we went upstairs to eat only to find out that Kev was done with the pipe long ago and had now moved on to installing the safety latches on the drawers in the kitchen. GRRRR. Again, I know it needed to be done, but REALLY? In the middle of my Family Pumpkin Carving Adventure??
So finally with our belly's full I was determined to finish my pumpkin. I had found an awesome stencil of a cat holding a pumpkin that I had traced was starting to cut out. Everything was going fine until I tried to get the last-and biggest-piece out. I ended up tearing the pumpkin and ruining the whole design which meant not only that my plan went to crap, but now I had nothing to show for it...

Except for maybe this sad, sad pumpkin (cat gone, now its just a small pathetic pumpkin in a pumpkin) 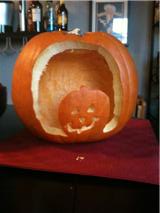 On the upside I got Jack and Kevin laughing pretty hard at me!
Now I understand why people carve those fake Styrofoam...

sounds like our weekends, I have big plans and sometimes it goes well!

the pumpkin is still cute, put a light in it, turns the lights out and it will look awesome!!

You plan, God laughs! I have had to come to terms with that quote long ago! I would've thrown the pumpkin out to the dogs, kudos to you for finishing it!!

I have so been there!