I still remember this day, 9 years ago, like it was today. I was in my college apartment and had just woken up and turned on the TV.  Every station was showing footage of the WTC. At that time reports were that there was a "fire", some channels not even aware that a plane had crashed into the tower. My roommates and I were glued to the TV as we got ready for our morning classes, and watched as the details of the day unfolded. As reports of terrorism and hijacking started pouring in. I remember being on the phone with my now husband when the 2nd plane hit. I remember thinking, before it hit the tower, that it was a rescue plane of some sort. And then I watched in horror as it hit the tower. I remember not going to class. And sitting with my roommates thru the day as we watched the towers fall.  As we watched the Pentagon get hit, and reports of other planes being hijacked. Even though I had no personal ties to the WTC, I couldn't help but feel sad for all the people that lost their lives. Their families. And I remember feeling fear and vulnerability... never before in this country, had we felt such a vicious attack. Was there more to come?

As the day was unfolded, I knew that the world would never be the same after that day...

3 years later, I was working in New York City for the summer. One day I went to the WTC site to see it for myself. I had no idea that I would be moved the way I was. You can't visit that site, and see that wreckage, and not be moved to emotion. At that time most of the wreckage still there.

Like this piece of what was left of Tower 2,
that fell in the shape of a cross: 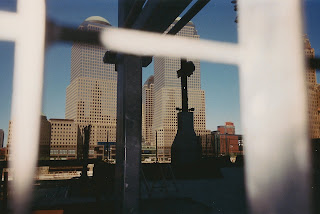 What really got to me was the notes written and left on all the barricades surrounding the wreckage. Some love letters written to lost loved ones, some pictures, flowers. Even a few notes still searching, hoping there love ones were still out there.
And then we visited a church across the street. A church that at the time of 9/11 was a refuge for the firefighters and rescue personnel that was busy working day and night searching for survivors. It had been turned into a museum of sorts and  housed the pictures and memorabilia from those days at ground zero. 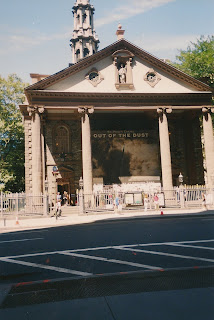 I will never forget where I was on September 11, 2001. How it forever changed the world as we know it. My heart goes out to all the people that lost loved ones that day. It also goes out to all the men and women that have fought for us since that day.
I look at my son, Jack, who will only know of 9/11 from what he reads in his history books. I imagine someday he will come home from school and ask me about it. Ask me where I was and what I did. And I pray that he will never have to endure a tragedy of this magnitude in his lifetime...

Where were you on 9/11/01? What did you think/do/feel?
Posted by Unknown at 1:53 PM
Email ThisBlogThis!Share to TwitterShare to FacebookShare to Pinterest
Labels: memories, Religion and serious stuff