A Recap of the best weekend ever!

I know what you are thinking...2 posts in one day? (ok, I'm sure no one is really thinking that, but I like to think I have more loyal followers than I actually do) I didn't want to take away from Mom Friendly Meals Monday with a combined post, so I decided to add a separate post so I could gloat-ahem-tell you about my amazing weekend.

Friday night was my 5 year wedding anniversary. I worked a brutal shift on Thursday night and when I got home at 1 am there was a beautiful bouquet of flowers, my favorite truffles and a card with such beautiful words written inside, I cried tears of happiness. After a great nights sleep we got up, played with Jack for a few hours and then, after dropping him off at grandma's for the night, headed to the city. For our anniversary we got tickets to see Jason Mraz and Dave Matthews at Wrigley Field, so we headed down early so we could beat the rush hours traffic. It was a beautiful day in the city. Perfect Fall weather. Warm enough to sit outside with out a jacket, but cool enough that you bring one, just in case!

After parking the car we walked around and tried to figure out where we wanted to go for some beers when we spotted the Uberstein Wrigleyville. The Uberstein is a Hofbrauhaus restaurant/bar and all their beer is imported straight from the original Hofbrauhaus in Munich. We have been to another location in Kentucky and loved it, so we were excited to see one in our own backyard. We stopped in and had a few Hefe Weizen's in the beer garden. It was nice to sit, people watch, and have some meaningful conversations. While we talked about Jack here and there, I was surprised to find that we actually were able to talk about lots of other things other than life as parents. Sitting there enjoying each others company, took me back. It reminded me of all the wonderful things that made me marry the man sitting across from me. And it made me giddy inside, knowing that we still had "it". We were still so much in love. 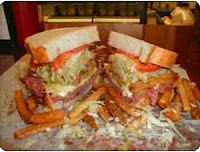 After we finished our Hefe's, we went next door to Lucky's sandwich company. You may have seen them on Man vs Food...they have these incredible sandwiches that I have been meaning to get my hands on for years. ( For what it's worth, we don't venture into the city all that often) This sandwich has it all-literally. Pastrami, cheese, tomatoes, fresh cut french fries and coleslaw. After out yummy sandwich and a few more pints, we headed out to walk to the concert. We enjoyed a few more cocktails at The Captain Morgan Club attached to Wrigley Field and met up with a few friends that were also there.  Despite being a tad disappointed that Jason Mraz didn't play a longer set, the concert was AMAZING! 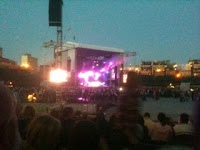 Also amazing-getting to sleep in Saturday morning. Once you become a parent you realize the true value of being able to sleep in-uninterrupted. We managed to slip in a quick lunch a PF Changes-yum...lettuce wraps-before my mom brought Jack home. The rest of the weekend was quiet & relaxing. Sunday morning we all put on our Bears gear and laid around for a lazy football Sunday. We noshed on Buffalo Chicken Dip and Pizza and watched Jack run around in his saggy Bears jersey, chasing after his football. 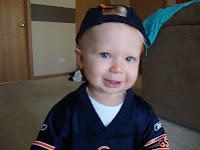 I wish it didn't have to end and that every weekend could be as sweet, but at least I'll have the memory of this one to last me a lifetime!
Hope you all had a great weekend too!
~Angie
Welcome all visitors from Monday Blog Hops!

Posted by Unknown at 6:27 PM
Email ThisBlogThis!Share to TwitterShare to FacebookShare to Pinterest
Labels: blog hops, Enjoying the Sweet life

I am following you back from last weeks FMBT. Sorry I am a bit late, but better late than never right? :)
Have a great week.
Cindi
www.littleyayas.com